There’s no denying the uniqueness of drag as a modern-day art form. With so many different styles, looks, and transformations to choose from, there are endless possibilities of how to dress up as a drag queen. As a public character, it’s up to them to decide which type of drag best suits their own personas which makes it very exciting. That said, there are certain styles out there that have stood out more than others and this article will detail some of the most popular drag queen styles used today.

A faux queen refers to a biological female who adapts the typical style of male drag queens. They’re also called a bio queen, diva queen, or a hyper queen. Similar to traditional drag queens, faux queens play gender norms and gender roles at drag shows and the like.

An androgyny/genderfuck is a drag queen that combines both masculine and feminine characteristics. Also known as anti-queens, these performers are very artistic in nature and are adept at blurring the lines between gender boundaries. They approach fashion in a sexually ambiguous manner along with their gender identity and sexual lifestyle.

A fish is a very feminine drag queen. They take pride in looking like a biological woman and they strive to look as close to a real female as possible. Fishes are known for being very polished and they take their drag with serious intent, almost to the point of throwing shade at the types of drag that do not represent them.

A club queen is a type of drag queen that draws inspiration from the NYC club kid scenes back in the 80s/90s. They use unique make-up techniques and wear striking fashion items to slay “drag balls” with almost zero contest.

As the name suggests, a goth queen inherits her persona from classic horror and goth films with their dark, gloomy appearances. You’ll rarely see an eclectic group of colours in this drag queen style since they all wear black. Most goth queens prefer dark-themed makeup styles along with white painted faces.

A pageant queen is one that shines under the spotlight. They take drag to extreme heights and invest in everything they can to land on top of the competitions they join. Basically, pageant queens take “fish” to a whole new level. They are very meticulous and polished with their drag because they are often judged with even the slightest of details. Pageant queens employ elaborate gowns and jewellery to exude elegance and win the crown.

A camp queen is one that uses a drag aesthetic inspired by clown-like values like satire, ribaldry, and exaggeration. These queens are known for delivering insults in comical methods while being brutally honest. For camps, it’s more than just a style, but a lifestyle they maintain. They have a very good sense of humour and their comic delivery is so smooth, they keep everyone up on their feet and entertained almost every time they show up.

A transdrag is a drag queen that has already started her transition from male to female, but yet is still performing in drag shows. While not all transdrags make a full transition, some take the next step to complete their female looks like undergoing breast implants and plastic surgery.

A tranimal (also known as a terrorist drag) dissects makeup and fashion styles, often using elements of surrealism and mix it with social issues, punk rock, and performance art. Tranimals wear unkempt clothing and wigs to represent their animalistic persona. Some tranimals prefer to hide their male characteristics, but do not necessarily tuck or shave when dressing. This creates a constant push and pull between gender boundaries that these drag queens are known for.

An activessle is a drag queen or a group of drag queens that unite for a charitable act in their communities. They are often the unsung heroes in the drag world and many of them raise funds to support charities that may or may not be LGBT related. Some activessles even protest for both civil and LGBT rights and will strongly fight for what they believe in.

Once upon a time, drag queens were like rare birds that could only be sighted at night clubs or parades. But with the rise of social media and television platforms, drag queens have been given an opportunity to display their art. These 11 drag queen styles are some of the most popular styles today and can serve as inspiration for those who are looking to enter the world of drag. 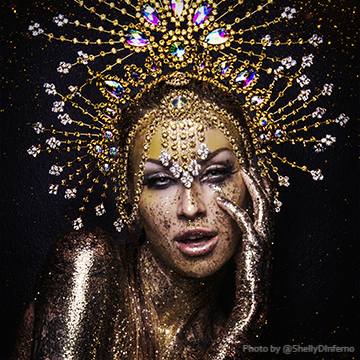 10% off your next purchase!